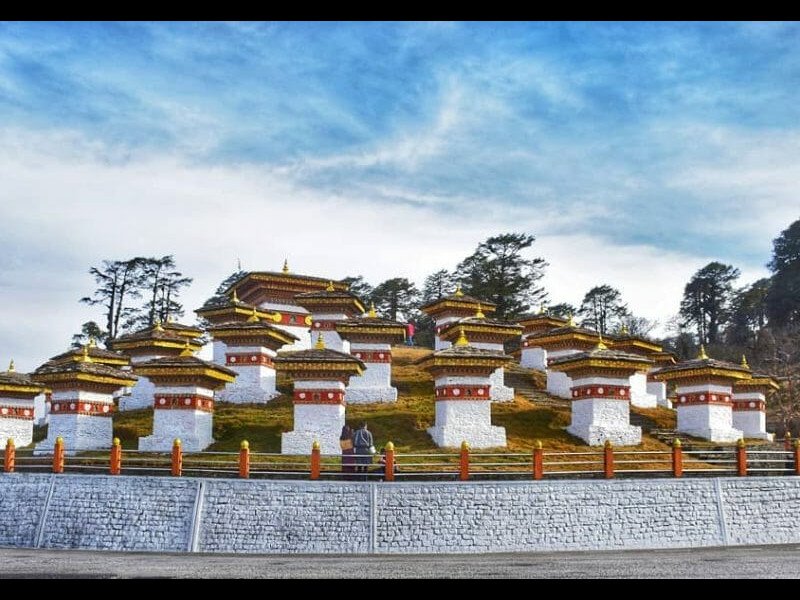 Thimphu is the capital town of Bhutan and the centre of government, religion and commerce with unusual mixture of modern development alongside ancient traditions. Although not what one expects from a capital city, Thimphu is still a fitting and lively place. Home to civil servants, expatriates and monk body, and maintains a strong national character in its architectural style.
Thimphu has a population about 100,000. The town is made up of just three lines of shops and is the only capital in the world without traffic lights.

Drive of about 2 hours to Thimphu, the modern capital town of Bhutan. Visit Tam-Chog Lhakhang. (Alt.2400m/7875ft)

Also known as "fortress of the glorious religion", it was initially built in 1641 and later rebuilt in its present form by King JigmeDorjiWangchuk in 1965. The Dzong houses, main secretariat building which houses the throne room of His Majesty, the King of Bhutan. The National Assembly Hall is housed in a modern building on the other side of the river from the Dzong. During the warmer summer months, the monk body headed by His Holiness, the Je Khenpo, makes its home in the Dzong.

This stupa was built in 1974 in the memory of Bhutan's third King, His Late Majesty, King JigmeDorjiWangchuk, who is popularly regarded as Father of modern Bhutan. The paintings and statues inside the monument provide a deep insight into Buddhist philosophy

It is dedicated to connect people to the Bhutanese rural past through exhibits, demonstrations, educational programmes and documentation of rural life. The principal exhibit in the Museum is a restored three storey traditional rammed mud and timber house, which dates back to the mid-19th century. The design and form of house is that of an average household in the Wang area during that era. The age of structure demonstrates the durability and performance of the building materials. From ground to top floor, household objects, typical domestic tools and equipments that would have been used by a family during that period are put on display. The Museum is also developing some of the native trees and plants that were used for various domestic purposes in the rural households.

With the opening of TextileMuseum, under the patronage of Her Majesty the Queen AshiSangayChoden, Bhutanese Textilehave reached new heights as one of the most visible distinct art form. The TextileMuseum has opened its exhibition on six major themes - warp pattern weaves, weft pattern weaves, role of Textiles in religion, achievements in Textile arts, Textiles from indigenous fibers and the royal collection. The crowns of Bhutan's Kings, namzas (dresses), the first version of Royal Crown and other accessories used by members of Royal family can be found in the Museum. The goal of the Museum is to gradually become a center for Textile studies that will carry out documentation, research and studies on Bhutanese Textiles.

Junghi Paper factory comprises of two enterprises; the unit in Thimphu produces traditional handmade paper from natural plants mainly from ‘Daphne’ plant species which is insect-resistant. The other unit in Jimina, 22 km from the centre Thimphu town, recycles waster papers. The traditional handmade papers are widely used for religious scripts, packing materials, hand-carry bags, lampshades, envelopes, calendars. The paper looks a lot like Japanese washi, and in fact a lot of Bhutanese paper is exported to Japan also.

Located at a short drive from Thimphu city centre, visitors can get a good overview of the Thimphu valley from the Buddha point (KuenselPhodrang). You can pay your obeisance and offer prayers to the Buddha, the largest statue in the country and then walk around and take a glimpse of the valley.

Punakha served as the capital of Bhutan until and still it is the winter seat of Je Khenpo (the chief abbot). Blessed with temperate climate and owing to its natural drainage from Pho Chhu (male) and Mo Chhu (female) rivers, the Punakha valley produces abundant crops and fruits. There are splendid views of the distant Himalayas at Dochula pas (alt. 3,050m) on Thimphu – Punakha road.

Dochula pass is located on the way to Punakha  andWangduephodrang districts from Thimphu. This pass is popular tourists spot due to its ideal location from where one can enjoy 360 degree of beautiful panoramic view of Himalayan mountain range, especially on clear winter days. The beauty/attraction of this place is further enhanced by DrukWangyalChortens-108 stupa built by the eldest Queen Mother Her Majesty AshiDorjiWangmoWangchuk to commemorate the expulsion of Assamese guerrillas.

Built strategically at the junction of Pho Chhu and Mo Chhu rivers in 1637, by ShabdrungNgawangNamgyal to serve as the religious and administrative centre of the region, Punakha Dzong has played an important role in Bhutan's history. Damaged by four catastrophic fires and an earthquake, the Dzong has been fully restored by the present King. The Dzong is open for visitors during Punakha festival and in summer months when the monk body moves to Thimphu.

The ChimiLhakhang, situated on a hillock in the centre of the valley, is dedicated to Lama DrukpaKuenley, who in the late 15th century used humour, songs and outrageous behavior to dramatise his teachings and due to this also known as "Divine Madman". This temple is also known as the temple of fertility. It is widely believed that couples who do not have children and wanting one, if they pray at this temple, they are usually blessed with a child very soon. It is about 30 minute walk across field from the road to the temple. The trail leads across rice fields to the tiny settlement of Pana, meaning "field". It then follows a tiny stream downhill to Yoaka and across more fields before making a short climb to ChimiLhakhang

It is one of the oldest and most sacred shrines of the Kingdom dating back to 7th century (the other is JambeyLhakahng in Bumthang). The lhakhang complex is composed of two temples. The first temple was built by Tibetan King, SongtsenGampo in the 7th century and in 1968, H.M. AshiKesang, the Queen Mother of Bhutan, built the second temple in original pattern.

This Dzong, with a delightful village nestling at its foot, was built in 1646 by ShabdrungNgawangNamgyal to commemorate his victory over the Tibetan invaders. Historically and strategically this Dzong withstood all its glory and was featured in 1914 vide National Geographic magazine. The glory of Drukgyel Dzong remained even when it was destroyed by fire in 1951. On a clear day, one can see the commanding view of Mount. Chomolhari from the village, below the Dzong.

Built in 1646 by ShabdrungNgawangNamgyal , the first spiritual and temporal ruler of Bhutan, the Dzong houses the monastic body of Paro, the office of the Dzongda (district administrative head) and Thrimpon (judge) of Paro district. The approach to the Dzong is through a traditional covered bridge called NemiZam. A walk through the bridge, over a stone inlaid path, offers a good view of the architectural wonder of the Dzong as well as life around it. It is also the venue of Paro Tshechu, held once a year in the spring.

After breakfast, drive to airport and depart.

All accomodations in 3 Star Hotels 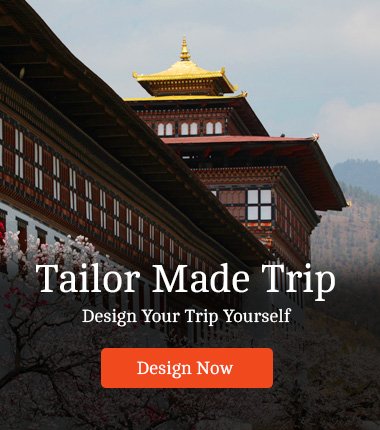 Quick Links
Destinations
Connect With Us
We Accept